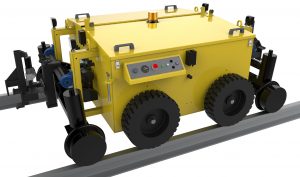 The rail industry continues to power the U.S. economy, with nearly 600 freight railroads in operation, according to the Association of American Railroads. It’s a 140,000-mile system that generated nearly $70 billion in revenue in 2016. In addition, the number of light-rail vehicles has increased by nearly 20% to more than 20,000 trainsets, locomotives and coaches since 2000, according to U.S. Commerce Department figures cited by Siemens AG.

It’s a trend that signals a “renaissance in rail,” with passenger volume steadily increasing, Siemens reported. As interest in rail development and expansion increases, rail manufacturers and railway operators must be prepared to meet increased demand–whether it’s today or in 15 years.

This includes the use of more efficient maintenance techniques. Nu-Star Inc. already has a solution available for this.

The battery-powered material-handling solutions manufacturer offers a remote-control Power Pusher Rail Mover system that eliminates the inconvenience and potential safety issues of traditional railcar moving equipment. The mover can ride on railroad tracks and off railroad tracks for increased agility.

“What’s unique about it, is that it features a low profile, so it’s short enough to go underneath the train for servicing,” says Ryan Blesi, vice president of material handling and a design engineer in the Power Pusher division. 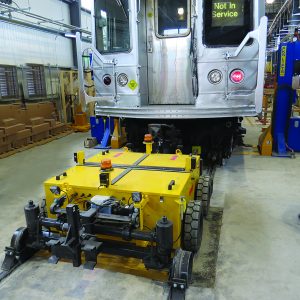 For example, trains with bogies (electric wheelsets that go underneath the railway vehicle) come with many inherent challenges. The wheelsets can weigh up to 15 tons. Traditionally, workers raise the body and climb underneath to remove the wheelsets by hand for service and preventative maintenance.

“It’s dangerous for people to climb underneath a train to pull those out,” Blesi says. “The Power Pusher Rail Mover is compact, so you don’t need a forklift or another train to move a train in and out. There’s also cost savings because you don’t need an overhead crane to perform service functions on a train.”

“As our world grows and our population grows, there’s a bigger emphasis on infrastructure, and public transit is getting bigger,” Blesi explains. “But you can only fit one crane in a facility. So if you want to be adaptable and need another piece of equipment that serves the same function on the other side of the plant, it makes sense to use a Power Pusher Rail Mover instead of installing an entire crane set.”

Other potential benefits of the Power Pusher Rail Mover include:

Nu-Star also offers customized options so companies can tailor the Power Pusher Rail Mover to connect with all types of cars, including older models.

“One company we worked with had a variety of trucks or bogies, so we customized the attachment so they could quick change out the coupling to be able to use it with each style. So depending on what train that needed to be serviced, we had a way to be able to connect to it. We also powered it so when it clamps you don’t need to climb under the train to hook on a chain or connect it in some way.”